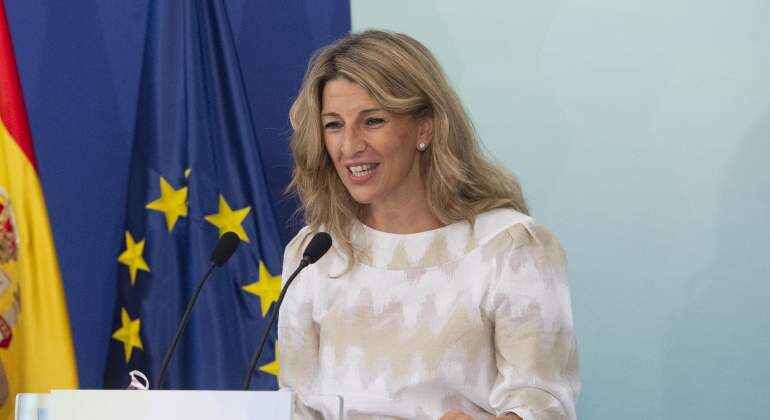 The Ministry of Labor has revealed the Government’s intention to request money from the European Commission credit line included in the framework of the Recovery and Resilience Mechanism (MRR) that complements the Next Generation non-refundable grants.

An option that although the Executive has not ruled out, it had left parked. Specifically, the department headed by Yolanda Díaz will use community soft loans to finance the tripartite fund that it intends to create in order to finance the new “Erte” modality that is negotiating with employers and unions.

In the draft Royal Decree-Law that he presented at the labor market modernization table, it includes a new additional provision (twenty-fourth) of the Workers’ Statute that creates the Endowment Fund for the Employment Sustainability Mechanisms (MSE), This is the name of the future instrument that will complement the current Erte .

Among the sources of income for the fund, Trabajo points out that “it can be financed with the use of European funds , specifically those from Sure and the Recovery and Resilience Mechanisms (MRR), in the short term.”

MRR and not Sure
However, in the Analysis of the recovery and resilience plan of Spain carried out by the Technical Services of the European Commission, nothing is said about the Sure Fund: “The Spanish Government intends to request more help from the MRR (in the form of a loan) to finance partially this regime, “he explicitly states.

The Recovery and Resilience Mechanism (MRR) approved last year by the European Commission foresees that Spain will receive almost 70,000 million euros in the form of non-reimbursable grants and another 70,000 million in a credit line with more favorable conditions than those of the market. At the moment, Spain has only requested the subsidies, leaving aside the possibility of resorting to the MRR credits.

Not so in the case of the Sure fund, a line of credit also created last year by the EC that goes directly to the market in search of financing with favorable conditions that it then makes available to interested states. The Sure has been created to help fund spending on maintenance measures employment on the occasion of the Covid . Spain has opted for this tool and has received the right to obtain just over 22,000 million euros, of which it has already received the first loans from the EC.

The Government committed with Brussels, but also with the social agents, to create a new type of Erte whose objective is to prevent companies that are going through delicate economic moments from deciding to dismiss their staff as a first resort. For this purpose, the Employment Sustainability Mechanisms (MSE) was born, complementary to the current Erte (Temporary Employment Regulation File for economic, technical, organizational or production causes or those derived from force majeure) used profusely during the Covid and currently with about 450,000 workers under its umbrella.

Unlike the Erte, the MSE will be used when, for reasons of an unforeseeable nature beyond the control of the company , the activity is impeded or limited in any of the work centers. In this case, the company may request the mechanism that will entail the reduction of the workforce.

Like the Ertes applied in the pandemic, accessing the mechanism implies a commitment not to fire until after six months after the end of the aid that the Sepe will grant. Likewise, during the time that the MSE is active, no member of the staff may work overtime and the company may not hire new personnel or go to outsourcing companies.

Tripartite fund
In order to finance this new benefit, the Government will create a fund that will serve as an economic cushion to face situations that could alter the activity of many companies at the same time . Said fund will have a tripartite character since companies, workers and the Government will contribute funds. In the first two, it will not involve an increase in current social contributions, as it will be nurtured each year by the amount of the positive remainder of the Sepe generated by the difference between the contributions paid by companies and workers and the expenses derived from unemployment benefits.

But to start, the Ministry of Labor is considering a first endowment from Sure or MRR loans in the short term. But also unemployment insurance or reinsurance that the European Union could create. Finally, you will be able to receive funds from the General Budgets.

Follow The Aluminum Trail To Find Out The Limits Of Inflation